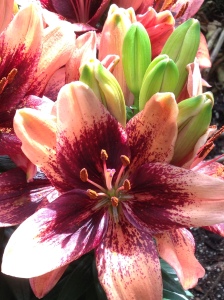 Today my wife and I visited The Biltmore Estate in Asheville, North Carolina. It was our first visit. And what a delight it was, too.

If you’ve never been there you must put this on your bucket list; it is well worth your time and the price of admission. Named for their Dutch family village of origin (“Bildt”) and an old English word for rolling countryside (“more”), this estate was imagined by George Vanderbilt after a visit to North Carolina in 1888 when he was just 26 years old.

The massive acreage initially purchased has been reduced drastically to a mere 8,000 acres now, the lion’s share having been sold by Mrs. Vanderbilt to the U.S. Forestry Service for a pittance after her husband’s early death in 1914. George Vanderbilt first opened it up to friends and family on Christmas Eve 1895.

The house had electricity from its very beginnings, and sported an indoor swimming pool, bowling ally, gymnasium, etc. It was filled with ornate furniture, thousands of first edition books, original artwork from the masters, an elevator; it employed 35-40 house employees, and included extensive flower gardens and an enormous greenhouse.

Unlike other opulent places I have seen in the past that have left me with admiration but also a desire to just go home to the simplicity of my own life . . .

I could move into the Biltmore tomorrow and be just fine and dandy.

George Vanderbilt was the grandson of the extremely innovative and tenacious Cornelius Vanderbilt. Although raised in simplicity, his grandfather’s acquired business acumen served him well, as did his catlike ability to seemingly always land on his feet. He left his descendants a fortune.

George was an avid reader, reading approximately 81 books per year; his collection contained over 22,000 volumes. He had the wherewithal to travel, collect rare pieces of art, furnishings, and ideas; his home is filled with the evidence of these travels. It is an exquisitely tasteful collection.

You cannot help but be overwhelmed by the sheer size of the estate: extensive fields of wildflowers, heavily wooded expanses, fields where hay is being mowed and rolled, rushing streams, wild azaleas lining the roadside. And inside the house itself with over 250 rooms the amount of hardwood is astounding. The craftsmanship is unparalleled, and I could not see a single crack visible in the plaster. Every look out the rear windows, whether from the long porch or from a bedroom, provides a breathtaking panoramic view of the mountains and surrounding forests.

Innovative systems for the ironing of tablecloths and bed sheets, a basement motor supplying air for the pipe organ in the first floor dining room, a lighting system installed in the floor of the swimming pool, and even a creative way to collect the excrement of cows in the dairy farm floor (which has now been replaced with a winery BTW) and use it for fertilizer in the gardens, etc. The innovations go on and on.

But I digress. As I was saying, the sheer size of the estate is a show stopper. And it was interesting to me, today, that as a large storm was moving in on the area, dark clouds approaching ominously . . . I was struck by the fact that the estate itself seemed equally as impressive as the mighty storm:

two large and immovable forces facing off with one another.

To build, furnish, and landscape the Biltmore no expense was spared. George’s wife had opened it up for visitors as early as 1930 at the request of the City of Asheville, to increase tourist revenue during the Great Depression. But as with all things material, soon it was too expensive to maintain. After about 1956 there was no longer any original Vanderbilt family member living there. And the large estate fell into disrepair.

The family has assured that great pains are taken to make its restoration authentic to 1895 standards; a worker there today told us it takes approximately 5 years to restore a single room properly and furnish it with original art, books, rugs, and furniture.

Stone Mountain Park is practically in my own backyard, so I see the three figures carved into the granite on a regular basis. But it impresses me every time with its grandeur. I’ve not seen Mount Rushmore, but I’m sure I would be impressed there as well. And one day I hope to see the amazing Crazy Horse Memorial, and the Noah’s Ark replica in Kentucky.

These man made marvels, along with many others I have not yet seen (particularly in Asia and parts of Europe) are awesome. And a part of their grandeur is more often than not their enormous size.

Please understand, I am not saying that The Biltmore would win in a contest with a giant thunderstorm, or that any number of these monuments could not be effaced by the forces of nature; certainly they can. All I am saying is that the feeling one gets in the presence of these fortresses of creation is one of stability, majesty, and longevity.

Human beings tend to be wowed by size and grandeur. Witness the Tetons, or El Capitan; Kilimanjaro, or Everest. The size of the oceans, the grandeur of the Redwoods and Sequoias . . . . The list is endless. [And if we go the opposite direction and begin to include in our list the tiniest things we can see our reaction is the same; the minute impresses us, too.]

It is built into us human beings to respect grandeur; we are floored by splendor, awed by enormity. Although there may exist in us a sense of smallness in the presence of the majestic, concomitant with that there exists a sense that things are in proper proportion.

There is a sense of security that accompanies our awe, a rightness that inspires safety to our trembling emotions.

Thirteen years ago this month I stood in front of Saint Michael’s Cathedral in Vienna, Austria, the church where Franz Joseph Haydn was recruited as a singer at the age of 8. It is awesome in size and architecture, and absolutely gorgeous inside. It was Easter 2004, and the church was packed during mass.

And I felt the same awe, the sense that things were as they should be: my smallness, and the greatness surrounding me. Proper proportions. Security.

6 Responses to The Biltmore Estate