OK. So yesterday didn’t end up going exactly like I wanted.

I had just returned to the office after a quick trip to the bank, and had just enough time to check emails and phone messages before heading to the gym, then home.

I changed into my gym shorts (so I would be ready to dash out the door) and sat down in the swivel chair in front of the computer screen. I could not have been there more than a minute or two when I felt something biting on my legs. I looked down and there were dozens of ants on my socks!

I quickly began killing them (I apologize to any of you who do not approve of such violence), then felt them also in my pants, biting in places the FCC would frown upon me mentioning in a public forum like this. Yes, I literally had “ants in my pants” (for the first time in my life).

I ran into the bathroom, disrobed, and shook my shorts into the toilet. Then I returned to my office chair to look for stragglers. I did find three or four, but that is all. No trail to the nearby trash can, however. Puzzling.

Several ants were meandering around in my duffel bag, so I tried to purge it of the tiny adversaries as quickly as I could. Then I headed to the gym.

After walking on the elliptical for 15 minutes, periodically gazing at the swelling in my legs (welts forming quickly), feeling more bites on my feet, and now on my arms and back, I gave up the exercise idea and headed home dreaming of a diphenhydramine overdose.

While driving I had the sensation that my field of vision was occluding, and dark areas were encroaching around the edges. I kept breathing, trying to just get home as fast as I could while at the same time trying to stay aware of my level of consciousness . . . just in case I needed to stop the car and pass out somewhere.

Finally, I arrived safely at home. I quickly took off all my clothes, dumped them into the washing machine, put my shoes and duffel bag in the garage, took 75 mg of diphenhydramine, and lay on the bed naked as a jaybird.

The welts were well pronounced by this time. My breathing was becoming a bit raspy, too. Shortly my wife returned home to find a stark naked Kafkaesque creature in the bed. After a couple of hours the antihistamine worked miracles, and we applied hydrocortisone and lidocaine spray to the non-private areas.

As the night wore on, more antihistamine was consumed, and today the regimen has continued. Most of the welts are gone now, but have been replaced by pustules. This is not a day for me to wear a bathing suit. Let me put it that way, OK?

Tiny little insects, aren’t they? But they did me a world of hurt. And my only theory (by the way) is that I carried food in my duffel bag days before, something spilled, then the ants found it. But I don’t know that to be the case. My wife asked me, “Were they fire ants?” And I replied, “All ants are fire ants as far as I’m concerned!”

I have discovered today that keeping my legs elevated helps, but the itching continues, as does the diphenhydramine and other meds. I need cheering up. Pizza might do it! Ha!

At any rate, I have told my story about ants. The “uncle” part actually happened right after they bit me. That is, I said, “Uncle,” but they still didn’t stop.

I guess ants aren’t familiar with the tradition of a fair fight. 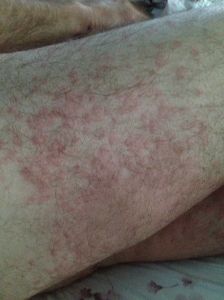 Ant bite welts on my leg; hand in the foreground.

12 Responses to Ants and Uncle