Do You Own Your Story?

When I was a little boy growing up in East Tennessee in the 1950s I never recall wanting to be someone else.

In adulthood there was a continuation of this fantasy, but it took a more subtle form. By this stage of life I had come to realize I could not be that other person. But the fantasy still gnawed away at me anyway, making me feel like a failure, causing me to see myself as less than others, making me demean myself and reduce my life to fit the smallness I felt.

When you listen to the story of another person’s life you can either appreciate it for what it is, or you can wish to make it your own. The trouble is, all the while you are vacillating between these two, you are also living your own life, writing your own story, filling the pages of your own book. Even when you are unaware of it.

Which leads me to ask the question, “Do you own your story?”

When I was a child my father used to tell stories about the various occupations he had had in his early years: steward on the railroad, repossession agent, sandwich deliverer, ice plant worker, etc. And I was fascinated by all those jobs. I wanted a life like that (I thought). Then as I grew older I began to see that might not have been the most successful employment history to accrue.

Nevertheless, it was Dad’s story. And I loved him, varied employment story and all!

By the way . . . I got my childhood wish. I could give you a laundry list of all the different jobs I’ve done in my lifetime.

Sometimes, that bothers me.

But as I grow older, I have come to see it all very differently.

Our life stories are like that, you know. The proverbial “grass is always greener” in the story of someone else. My story. Well . . . that’s just – MY story. You know. Nothing special.

It is, indeed, very special. Unrepeatable. Without parallel. Unique. Not to be compared with anyone else.

I have written (but have yet to publish) a brief essay on orchestration in life; one day I may share that with you all. Whether you are a person who believes in supernatural direction in your life, or you are more comfortable with the belief that it is all random, you still must admit that factors converge in our lives and relationships are enmeshed in such a way that certain events occur and particular alliances are solidified.

Human beings tend to rank those events and alliances; we decide which ones to consider valuable. That’s one thing that makes celebrity so important to us, isn’t it? It’s why we esteem the CEO of Ford Motor Company more than the Brook Park, Ohio assembly line worker. It’s why we value the political opinion of a Hollywood actor over the employee at Chick-fil-A.

And . . . perhaps most damaging of all (and incongruous to boot) . . . we turn and judge ourselves in this same way. Our own life story is put under the fantasy microscope. And we (and it is no surprise) – come up short.

As I have stated in the video explaining the origin and intent of this blog (http://www.youtube.com/watch?v=8cL1pdOSyj4), your own story is more than worthy of being made into a blockbuster movie. I truly believe that.

I began to sense this about my own story not too many years ago. You see, I no longer wish I was someone else. My aim in life now is to be the best version of ME that I can be. As my friend, Landon Saunders used to say, “if you try to be someone other than yourself you can never be more than second best.”

The aspirations in my life, the successes and failures, the triumphs and disasters, the “agony and the ecstasy” (thank you, Irving Stone); these are mine. And mine alone. I own them. I do not love them all. But I embrace them. They have combined in such a way as to make me who I am. And although I would love to go back and rewrite some of my life history (lop off a bit here, shave off a bit there), I must “relinquish all hope of ever changing the past.”

The truth is, like the repeated anthem in the subject of time travel, to change these parts of my life would alter things in such a way as to make my life unrecognizable, not to mention the effect it would have on the life story of others. [I don’t mean to cheapen my point by directing you to movies and books of fiction; it’s just that I know most of us have at one time or another considered the what ifs of this scenario.]

Five years ago my father lay on his deathbed. I can tell you right now that his career path was not on my mind in his final weeks. I was proud of the man he was (imperfections and all) separate and apart from any occupation he had had, or any title he had been given. It’s not that it mattered little. It’s that it didn’t matter at all.

Embrace the unrepeatable, unique treasure that is your life. Your journey is your saga (to borrow from Old Norse); it is the stuff of legend. Triumph has no meaning unless there has been disaster or near-disaster. And love cannot exist where there is no loss, or chance of loss.

And so, let me ask the question again: Do you own your story?

You know, you carry it with you whether or not you care to recognize it. You could build on it, if you’re willing to acknowledge it. And others can benefit from it, if you’ll choose to tell it. If that brings shame, it can also bring honor. If that exposes hurts, it can also engineer healing.

Own your story! If you do . . . there is no telling where your journey may take you.

“By rights we shouldn’t even be here. But we are. It’s like in the great stories, Mr. Frodo. The ones that really mattered. Full of darkness and danger they were. And sometimes you didn’t want to know the end. Because how could the end be happy? How could the world go back to the way it was when so much bad had happened? But in the end, it’s only a passing thing, this shadow. Even darkness must pass. A new day will come. And when the sun shines it will shine out the clearer. Those were the stories that stayed with you. That meant something, even if you were too small to understand why. But I think, Mr. Frodo, I do understand. I know now. Folk in those stories had lots of chances of turning back, only they didn’t. They kept going, because they were holding on to something.”

(Samwise Gamgee, J.R.R. Tolkien, The Lord of the Rings) 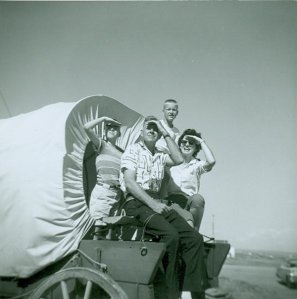 Our Story took us out west, summer 1963. Our lives would never be the same.

5 Responses to Do You Own Your Story?