A great story can lift your spirits when you’re feeling down; it can take you on adventures that are both enthralling and enthusing; it can transport not only your mind, but also your heart.

In short, a great story has the potential to change your life.

When my mother saw The Wizard of Oz in 1939 she was 15 years old.  She was smitten with it immediately, and would remain so for the rest of her life. Not only did the silver screen come alive with color once Dorothy opened her front door to Oz, but the characters portrayed in the movie had a literary color of their own that shone through the black and white format.

Stories! They can be unforgettable.

And we should not assume that the best stories are ones we hear about the most. For as much as I love the motion picture story of Dorothy in Oz, her exploits with the Scarecrow, Tin Man, Cowardly Lion, and the Wicked Witch of the West, I am equally taken with the back story of the Tin Man. A story of which I was totally unaware until just a couple of years ago (http://whitestonemp.com/film/heartless-the-story-of-the-tin-man/).

We all have a back story, don’t we? Moments of great success and/or great failure certainly mark points in our lives where innumerable factors culminate in one memorable event, and in that instant many can see the result of those innumerable factors. But there is always a back story. A history. A quiet accumulation of days and weeks percolating and simmering.

In our world of marketing strategies and constantly evolving communications technology there are many voices that call out to us. But voices have always called out to consumers, haven’t they? Criers and hawkers have forever made the populace aware of their wares, even from antiquity.

Sometimes the voices offer directions, such as Horace Greeley’s, “Go west, young man.” And the hearer is forced to make a decision about his/her life’s course. This was the case with Dorothy Gale in the movie adaptation of L. Frank Baum’s book, The Wonderful Wizard of Oz.

“Follow the yellow brick road,” she was told. “Follow the yellow brick road!” And the voice which begins this advice is joined by another, then another, until . . . it is a chorus of voices without number. And it is advice that she took, too. It is on this road that she meets her new friends, and her great nemesis, too. And it is this road that leads to her dream destination.

Unlike Elton John (who evidently preferred to say “goodbye” to it), Dorothy Gale actually benefits from her walk on this road, and in the books by L. Frank Baum (I am told) she continues to make journeys on this road to and from her family’s farm until they finally decide to move permanently to The Emerald City.

Some have suggested that the “Yellow Brick Road” was a reference to a place familiar to Baum in Holland, Michigan; others maintain that he frequently traveled by a road fitting this description in Peekskill, New York. Whatever the origin, it has now become a popular expression. Does it signify growing up? Or learning the location of your true home? Or is it a symbol for the life experience that forges your character?

I have no answer, unless perhaps . . . “all of the above.” The emotion that envelops me as I write today is simply the love I have for this story, a love passed on to me by my mother. Interestingly enough, of the many blockbuster motion pictures released in 1939 (Gone With the Wind, Of Mice and Men, The Wizard of Oz, Mr. Smith Goes to Washington, etc.), this one employs fantasy to make its point.

“How many hours are there in a mile?” “Is yellow square or round?” These types of questions are typical, according to C.S. Lewis, when we deal with questions in the metaphysical realm. And these are the kinds of questions one would not consider unusual in the Land of Oz.

But I digress. Fourteen months ago I began this blog, inspired by the task of caring for my aged mother. I wanted to try to preserve the story of her 88 years on this earth. I wanted to honor her memory in some way. And I wanted to explore the many ways that her life (and my father’s life) had influenced mine. There was no way I could know that mother had two months to live at that time. But I knew the end was imminent.

Earlier this summer I performed at The Yellow Brick House for “family night” (a night when the assisted living residents enjoy a meal and some entertainment with their sons, daughters, grandchildren, etc.). It had been 10 months since I was there last. On that occasion I sang for the residents, including my mother, just a week before she passed away in August 2012. My older brother was present that night, too, along with my wife and daughters.

I placed mother in The Yellow Brick House assisted living facility at the close of July 2012. It had intrigued me that the name of the facility was much like her favorite movie; it was a fitting location for her final days . . . on her journey. . . home.

And so, it may come as no surprise to you that:

Oh yes, by the way, the name of the woman who currently resides in the apartment mother had at The Yellow Brick House . . . is, as you might have guessed, . . . Dorothy. 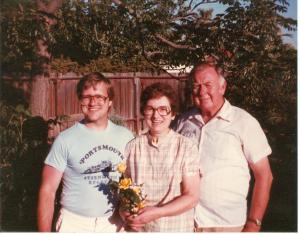 Mother with yellow roses (her favorite), 28 years ago; with me and Dad in Tucson, AZ.

My mother’s story and mine will never be the same story. Obviously, there are intersections of life’s road that we share. But there are other places where our life roads entwine one another, and are almost indivisible. When I was an infant. And when mother was an aged woman.

Her story has changed my life forever. Her back story continues to influence me visibly through seemingly invisible ways. For instance, her love for writing has infected me. I carry the torch of both verbal and literary communication, and I make proclamations with words, because to refuse to do so would not be consonant with my story.

My heart has been forever affected by a great story.